Costa Smeralda has successfully passed the technical sea trials carried out with liquefied natural gas (LNG), the cleanest fossil fuel in the world, which represents a real innovation in the cruise industry.

The Costa Smeralda is in fact the second cruise ship in the world, after AIDAnova, which is also part of the Costa Group fleet, to use this fuel, both in port and at sea, which guarantees a low environmental impact. LNG enables the virtual total elimination of sulfur dioxide emissions and particulate matter, and a significant reduction of nitrogen oxide and CO2. During the sea trials, which began on Saturday 16 November, the ship carried out a series of tests to verify the correct operation of systems, equipment and engines with LNG propulsion.

“The fueling of cruise ships with LNG is an innovation in which we were the first to believe five years ago, when we ordered the Costa Smeralda, setting an example for the sector which has since been followed by other companies. It is a safe and reliable technology, which is currently the most effective and feasible solution to ensure a significant reduction in the environmental impact of cruise ships in port and at sea”. – declared Neil Palomba, President of Costa Cruises.

Other innovations
Once the sea trials were finished, the ship returned to the Meyer shipyard in Turku, Finland, to complete the interior layout. The first Costa Smeralda cruise will depart from Savona on 21 December 2019. The itinerary, which will be repeated until May 16, 2020, will include Savona (Saturday), Marseilles (Sunday), Barcelona (Monday), Palma de Mallorca (Tuesday), Civitavecchia (Thursday) and La Spezia (Friday).

The great innovation of liquefied natural gas fuel is added to other technological innovations, designed to further reduce the environmental impact of the ship, intended to make the Costa Smeralda a real travelling “smart city”. The ship will in fact be able to produce the daily water requirement by directly converting sea water and will minimize energy consumption thanks to the use of LED lights, the recovery of heat produced by the engines, the particular shape of the hull designed to significantly reduce friction with the water and elevators of new generation, designed to recover the operating energy through the re-introduction into the electrical system.

Costa Smeralda will represent the synthesis of the coherent commitment to the reduction of disposable plastic, a central theme for the company for about twenty years. Eliminated for the most part in the context of catering and hotels and replaced with alternative materials, plastic will be further reduced, anticipating the objectives of the European Directive.

100% separate collection and recycling of materials such as plastic, paper, glass and aluminum will be part of an integrated approach aimed at the implementation of circular economy projects. Also on the new flagship great attention will be devoted to the theme of food, with the 4GOOFOOD program dedicated to the reduction of food waste and the recovery of surpluses for social purposes, with the innovation of the Restaurant LAB – Laboratory of Taste, to involve guests in an entertaining way in the field of food sustainability. 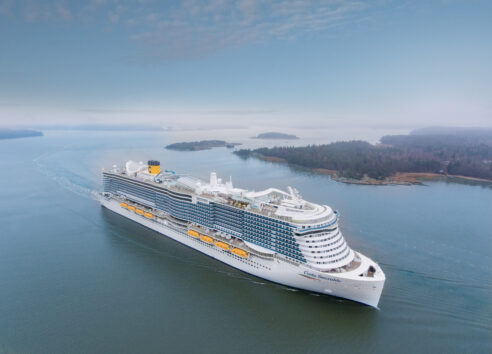