Holy Week in Central America: step out of the ordinary

There is a special and exotic mixture of mysticism and magic that surrounds the Holy Week celebration In Central American lands. Various handmade carpets frame the traditions of the time during Lent season, which are mixed with displays of religious designs decorated with vivid colors, exquisite dishes and many processions.

The ethnic diversity characterized the religious celebration, in addition, the tropical climate and different manifestations of faith and religion, provide a special fusion of unique traditions.

Streets decorated with natural flowers carpets
Among the special Holy Week smells, we can find the singular corozo incense, (fruits of various species of thorny palms), copal and myrrh. This smells brings a characteristic essence when passing through the expected processions. As part of the religious ritual, the special carpets are made for each of the holy days, with designs that blend sand, tinted sawdust, flowers, mineral dust and the peculiar corozo.

The creation of the flower carpets is one of the most popular traditions of Central America. Among the most spectacular of the region are those held in the small colonial city of Antigua Guatemala, a cultural World Heritage Site where amazing processions are celebrated, such as the consecrated image of “Our Lady of Mercy or Nuestra Señora de la Merced” and the procession of “Jesus of Nazareth or Jesus Nazareno de Santa Catalina de Bobadilla”; this city records the oldest creation of carpets in the region, the first procession dates back to March 10, 1543 in Santiago de los Caballeros of Guatemala.

There is a beautiful tradition for the Holy Friday procession, in the popular neighborhood located in the city of León, Nicaragua. Early on in the morning a crowd goes to the “Calles de las alfrombras” which translates to “streets with carpets”, to observe the art offering made by the local craftsmen for the procession of the Holy Burial; in this centenary tradition about 40 carpets are made.

In El Salvador, Easter celebrations are held in the cities of Chalchuapa, Sonsonate and in the World Heritage Site, Izalco. In Honduras the main celebrations take place in Tegucigalpa and in Comayagua.

One of the most traditional processions is “Atalaya Jesus of Nazareth”, in Panama City; as a tradition, the attendees travel long distances as a sign of gratitude for the miracles they obtained, as well as to make special requests. In this season “La Trinidad”, is the most visited place by Panamanians, where the centennial “tree of granadillo” is believed to have curative and even miraculous powers. Visitors often place flowers and candles, offering prayers and favors for their health.

A very traditional career
In Belize, the cross country race of Holy Saturday is already a tradition, it has a route of more than 230 kilometers. The trip where thousands of spectators arrive to support the participants, is between Belize City and San Ignacio.

More that typical gastronomy
In Nicaragua and Guatemala the arrival of various seasonal fruits make for a diversity of fragrances and delicious preserved fruit jams such as red currant, jocote, tamarind papaya or coconut.

It is very typical In Costa Rica to eat chiverre honey, a pumpkin-like fruit, and in El Salvador, to eat various dishes made with sweet brown sugar, such as jocotes, bread, mango and sweet potatoes.

Another famous food during the season in all the countries of the region, are the torrejas, they can be made of bread, rice or pinol and are usually served with the exotic chilate drink. 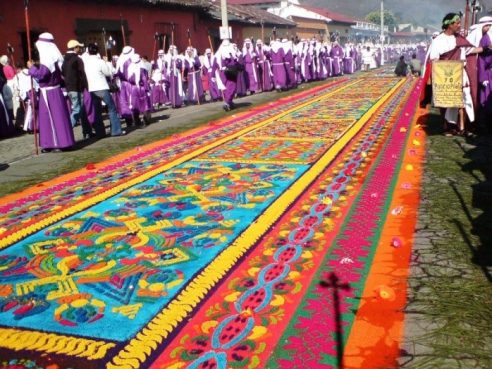