Jet Airways strengthens connectivity from Amsterdam to India with a daily, non-stop service to Bengaluru

This will be Jet Airways’ third daily service between Amsterdam and India. The new service will complement the airline’s existing direct daily operations to its hubs in Mumbai and Delhi in India, strengthening the centuries old connect between the two countries.

The new service will be the only non-stop service between the two cities and will operate in codeshare with KLM Royal Dutch Airlines, Air France and Delta Air Lines, with each airline placing their respective codes on the service, expanding connectivity and choice for guests travelling from Europe and North America to India or onwards to South East Asia.

Gaurang Shetty, Whole time Director, Jet Airways, said, “Bengaluru is a well recognised global ICT and business hub witnessing rapid growth in trade, commerce and tourism due to the presence of several large multinational organisations including many from the Netherlands. This has consequently accelerated demand for quality services to and from key destinations from across the world. We are pleased to be the only airline to offer a non-stop service between Amsterdam and Bengaluru, not only strengthening our presence in the Netherlands, but also offering greater choice to business and leisure travellers by connecting them from over 64 locations in Europe and North America via Amsterdam to Bengaluru. We are sure our guests will choose to travel with us to experience the best inflight hospitality on offer by India’s premiere international airline.”

Non-stop connectivity from Amsterdam Airport Schiphol highlights its importance as a significant European and North American gateway for both passenger and cargo traffic. In fact, guests travelling via connecting flights of codeshare partners KLM, Delta and Jet Airways to Bengaluru, will enjoy enhanced connectivity via Amsterdam from as many as 43 European destinations such as London, Paris, Barcelona, Berlin, Birmingham, Bristol, Copenhagen, Frankfurt, Geneva, Rome and other key cities, as well as from 21 leading North American cities such as, Atlanta, Boston, Detroit, Minneapolis, Miami, New York, Newark, Seattle among several others.

Additionally, guests of Jet Airways can gain from its unique advantage that allows them to travel and return via any of the carrier’s three European gateways (viz. Amsterdam, Paris, and London) on a single itinerary. Guests can also exercise a similar choice while in India from among the airline’s hubs in Mumbai, Delhi, and Bengaluru. In fact, those arriving in Bengaluru can leverage Jet Airways’ onward connectivity to 11 domestic destinations including its hubs in Mumbai and Delhi for extended pan-India connectivity to other destinations from its 44-city strong network.

Guests who are members of Frequent Flyer programmes of the codeshare partners – JetPrivilege (JP), Flying Blue and SkyMiles – can easily accrue and redeem points on each other.

The introduction of the direct intercontinental flight to Bengaluru will capitalise on the growing corporate and leisure traffic between the two countries, stimulating growth in cross border trade and commerce.

The new service will also enhance Jet Airways’ cumulative daily cargo capacity between Europe and South India by as much as 15 tons facilitating increase in trade of various commodities such as flowers, perishables, pharmaceuticals, heavy machinery, garments, electrical and medical equipment, auto parts as well as exotic food items.

Jet Airways will deploy its Airbus A330-300 aircraft on the route for a relaxed and enjoyable flying experience. The A330 features a spacious cabin with ergonomically-designed seats having ample leg-room, lie-flat beds in Premiere, award-winning inflight entertainment as well as a carefully-curated menu of fine-dining choices, surrounded with all the comforts associated with long-haul, international travel – together with the airline’s acclaimed spirit of Indian hospitality.

The airline’s latest non-stop service from Amsterdam also coincides with its launch of additional non-stop services between Paris Charles De Gaulle – Chennai and London Heathrow – Mumbai, which also commence on the same day. 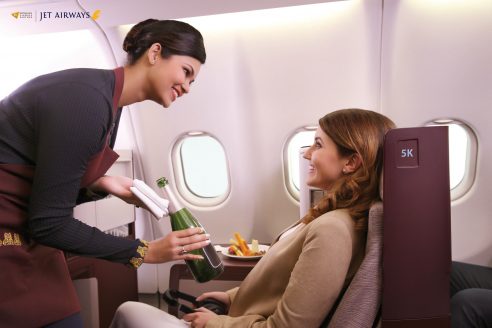