Receiving his prestigious award at the Cliff Beach Club, Minister of Tourism and International Transport, Hon. Richard Sealy and the British High Commission honoured Sir Cliff with the Barbados Golden Jubilee award. From his first visit to Barbados in the late 70s, Sir Cliff fell in love with the island and decided to call it home back in 2010.

British High Commissioner, His Excellency, Guy Hewitt mentioned at the presentation that, “the 50th Jubilee awards was introduced to recognise the outstanding contribution of the Barbadian diaspora. The inclusion of Sir Cliff Richard OBE, a longstanding resident of Barbados for more than twenty-five years, reflects his love and commitment to Barbados.”

Living on a wonderful estate called Sugar Hill, Sir Cliff enjoys watching the evening sunset while enjoying an ice-cold rum punch. While celebrating his 58th anniversary in the music business this year, Cliff Richard is indisputably Britain’s all-time greatest hit-maker – the ultimate pop star. No other UK band or solo artist is even close to equaling his 101 album releases, 123 single hits, or can claim to have occupied a place in our charts for the equivalent of over 20 years.

Sir Cliff said, “Life doesn’t have to pull you here and there. Just think Barbados and it will slow things down for you.” He also reminisced on his first visit to Barbados, when he said, “My friends and I used to drive down from Polo Ridge to the old Sandy Lane Hotel and often stopped, on the way, to watch the kids playing cricket at the side of the road, all trying to be the next Gary Sobers.”

Minister of Tourism and International Transport, Hon. Richard Sealy made the presentation to Sir Cliff and congratulated him on receiving the Jubilee award. Minister Sealy said, “As we celebrate our 50 years, we acknowledge Sir Cliff for his tireless contribution and everything he has done for our island. He has a longstanding relationship with us and he has also introduced many of his friends to Barbados to experience what it has to offer.

At this moment, Barbados is his home and this is now where his heart resides. We therefore, also want to encourage him to keep up the good work and on behalf of the Government of Barbados, we want to genuinely say thank you.” 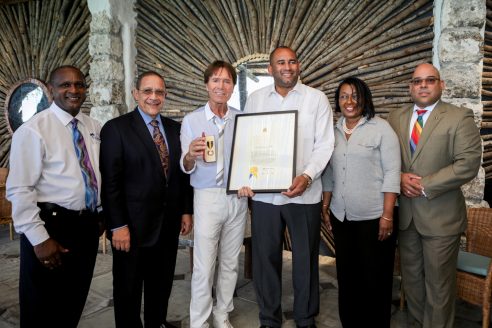